This was a problem I was working for a while. It is to do a proof of concept and see, with how much accuracy we can recognize a supermarket receipt. The scope is to try with 2 major supermarkets. One is Tesco and the other one is Sainsbury which are two of the leading supermarkets in the UK. The data set had over 2000 images and was a very challenging data set. Almost 60% for the receipts had below 20-30% accuracy (bad lighting conditions/angles/low resolution/crumpled) when the receipts are processed through the Tesseract OCR. 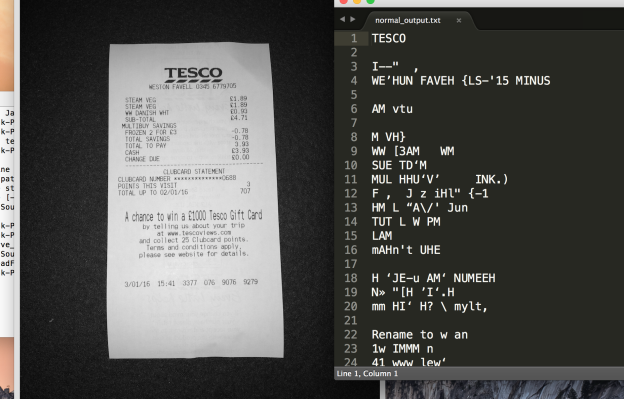 2. Thus using only the Tesseract won’t help. Let try normalizing and sharpen (Make dark grey to black and light grey to white) the image before sending to the tesseract (Oh, now the restaurant name has gone, but we can read some line items, this seems promising) 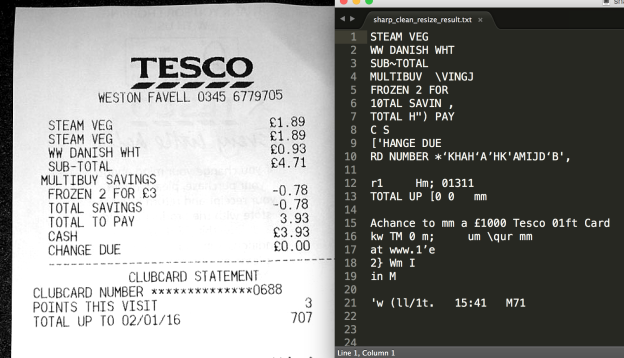 3. Okay, we need to get more aggressive. Let’s make the image grayscale, stretch the image a little bit normalize and make it as a binary image. (wow, that like 95% accuracy) 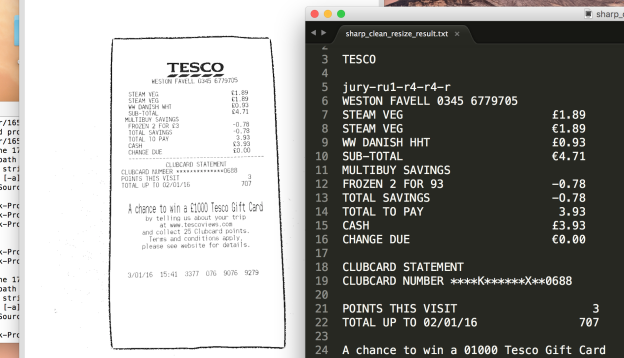 4. Okay, that went well. Let’s test it with another image which has less dark background than the previous image. (Tesseract and pre-processing + tesseract can read the line items but the pre-processed image reads the values too, but this introduced a new problem which is noise)

5. As we can see there is so much garbage value. Because the background has some kind of pattern, so when trying to normalize and make it binary it detects some part of the background as text too, this is known as image noise. (Okays, so the output is good, but we have to remove the background in order to make it accurate)

6. So I removed the background by calculating the average color of the whole image then start from the corner and remove the pixel, when I encounter a big change in color(when I get to the receipt which is white) I stop the process. (The result increased the accuracy of the values of the items and also reduced the noise/ garbage values )

7. This is how the receipt looks before and after the background removal before sent into the tesseract.

8. Okay, that’s great let’s try to out with a white/light background. As the color variation for dark to white is less(in the image) it starts removing the all pixels in the image, considering everything is background (Oh that was very bad.)

9. Okay so let’s try to take the previous approach we did, normalize and sharpen the image. Works well for this kind of image (light background) and a good recognition although the image has a shadow and crumpled. The last editor shows the results of the normal output from tesseract, without any pre-processing.

10. So to conclude the light background images gives a good result to the text sharpen and normalize approach, and the dark/mixed background gives good result for the background removal process.

To see the sample code please do email me @  sshniro AT gmail.com

Full-stack engineer with 5+ years of experience currently working in Salzburg Research with Europian Union innovation projects. Do reach me out at sshniro AT gmail.com for any queries. View all posts by sshniro